Morning fellow bloggers well so far no rain so I might just potter in the garden later and plant up my tubs of flowers as so far this year I have neglected my poor garden and its in need of some TLC, my son has just had his final exam at uni. and has nowh has got to join the world of workers, it doesn't seem 5 mins since we were going round looking at the university, he's finally made his mind up that he want to go into gaming but on the 3D art side rather than the computer programming although he learnt this as part of his degree, seems quite funny really as he showed no sign of artistic leaning as he was growing up. 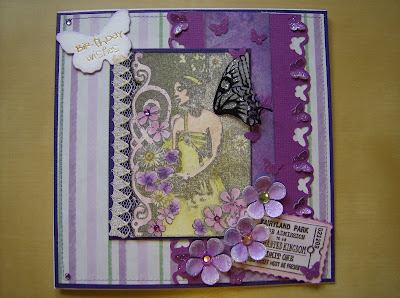 Well my card today is a fairy/butterfly card as there seems to be quite a few challenges this week featuring wings, butterflies and fairies so I decided to combine all 3 just to be different, the previous week I won the challenge at Simon Says and got to spend $25 so I chose the butterfly punch from Martha Stewart and some art stamps which included the butterfly wing which arrived by post yesterday. 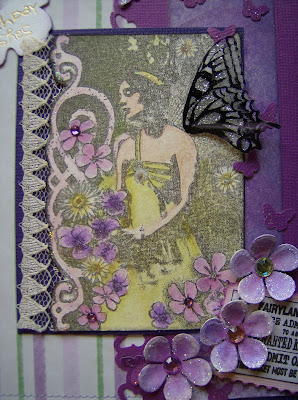 The background paper is a digi paper from Cuddly Buddly.....part of the lilac images I've been playing with, I distressed the diamond paper and then glimmer misted it to add depth of colour, the flowers I punched out and then painted to match the flowers in the image.....which is from Crafty Individuals. The wing was stamped onto acetate and then coloured in with glitter at the back to get a shimmer......you know me I do love my glitter and shimmer. 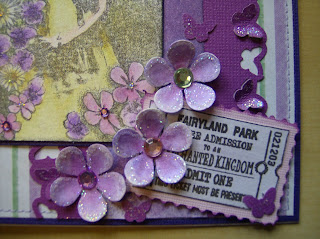 Love this card. So much going on and it's purple! :)
Edna x

This is gorgeous hun i love it, big hugs Pops x

I like the theme of this card and great ticket stamp too!

So pretty. Thanks for sharing at Sir Stampalot this month.
Pinky

My Creative Outlet by Janna said...

So pretty! I love the purples. Gorgeous! Thanks for sharing at Stamp Something this week!

Fantastic card, ,
Thanks for Joining us at Sir Stampalot and good luck!
Hugs
Francesca

OMG this is so beautiful what a wonderful image the design and colours are fabulous thank you so much for sharing this with us at Sir Stampalot.
Hugs
Lorraine x

This is beautiful Daniele. Great image and I love how you have added the wings.
Thank you for joining us at Sir Stampalot this month.
Clare x

Just lovely, fab purples! Thanks so much for sharing your creation with us at Stamp Something this week, hope to see you back again! :)

This is beautiful--I love the colors and all the fabulous details! Love the butterfly punch too! Thank you for joining us at Creative Inspirations!
Hugs,
April

love the purple! fantastic card! thanks for playing along with us at the Shoe!