Morning peeps at last some rain to make the grass green again, just as long as it knows when to stop and that the sun does shine again, I managed to get some time in the garden yesterday to cut back, dead head and weed. I only have a small garden but it still took me all afternoon, and I still have another side to do, which hopefully if it doesn't rain any more I will get out today and do. This year we have a lot of frogs as the ducks have left the tadpoles alone, we ussually get three ducks from the park come and visit us each year but this year they didn't hence lots of frogs which jump out when you start digging and weeding.....great fun when I was cutting back a plant and nearly died of fright....lol. 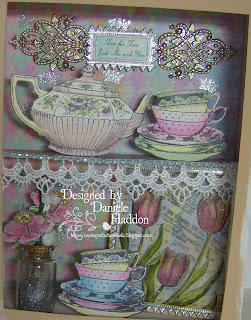 Todays project is a dresser cupboard with lots of bits n bobs using some of the new stamps from Crafty Individuals. When I saw the new set entitled ......Tea for Two I knew that I wanted to use one of the many templates that I have from House of Zandra, the only problem is getting a strong enough card to use as they are quite big templates and I hate using the original, the card I used wasn't quite thick enough for the paint crackle effect that I did on the outside of the dresser.All of the images have been coloured with prisma pencils.......actually I coloured them whilst I was on my holls.....chillin' in the sun. 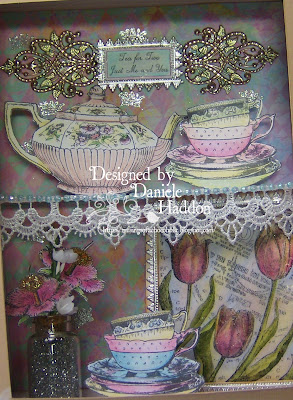 I've embossed crowns on he background paper, added lace and beads the the shelf edge.
The picture with the tulips on I heat embossed in clear and then popped it in the freezer so that the embossing cracked and you get that lovely crackled glaze effect......doesn't show up though on the photo.
The metal pieces have been brushed with Treasure Gold and the uttee button has also with the silver. 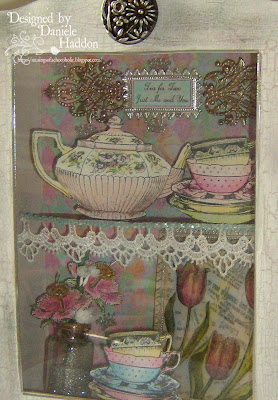 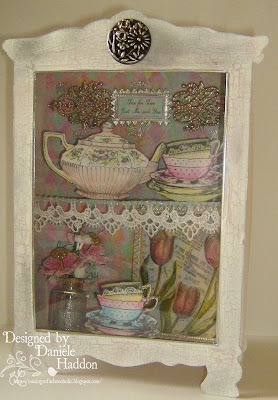 wow Daniele, this is so gorgeous, beautiful make. Annette x

This is a gorgeous creation hun - love all the pretty elements. Hugs, Claire x

What a fantastic dresser crammed full of the vital ingredients for a perfect summer tea. Love how you've embellished this. Thanks for joining us at Frilly and Funkie, hugs Jenny x

This is stunning Daniele. Such a fabulous design. I love the image, gorgeous colours and wonderful detailing
hugs Sue xx

Hello Daniele, thank you for your lovely comments. Your creation is amazing! There is so much detail, truly beautiful. Michelle x

This is fabulous Daniele! Love the papers and embellishments.

This is beautiful Daniele. I love everything about it. It's simply amazing x

this is fabulous Daniele, I like how you have embellished this,
Kevin xx

Daniele, this is such pretty fun!! love all your pretty details, hanks for sharing with us at Craft Room Challenge, Debi x

Thank you for sharing your fabby project with the DT from Frilly and Funkie Love it, hugs Terry xxxx

What a wonderful folded project and so vintage. Love all the little elements you have added. This reminds me of a cabinet in my Great Aunt's dining room. Thanks for joining us at Frilly and Funkie.
Hugs!
Cec

This is gorgeous Daniele. Love all the detail.
Mags
x

Absolutely gorgeous Daniele...Thanks for playing along with us at Divas by Design this week.
Wendy xx

what a creative work of art!

thanks so much for playing along with us at Alphabet Challenge!

WOW, this is absolutely stunning Daniele. Thank you so much for playing along with us at TPC this week. Pat K x

Lovely intricate piece of work. So much detail and very pretty result. Thank you for joining us at Craft-Room Challenge XOXO Zoe

WOW...What a fabulous creation... The attention to detail is amazing..Simply Beautiful... Thank you so much for joining us at Fussy & Fancy.... Hugs May x x x

So beautiful and what a unique project. So many stunning details.

Thanks for joining our lace challenge at Alphabet Challenge blog.

Suzanne B aka brookfies said...

Hi Daniele, your cabinet is a stunner. I love the colouring in with the pencils in fact I love everything. Thank you for sharing with us at the Craft Room. Wishes, Suzanne x

Just beautiful - you see something new each time you look at it!

Thanks for joining us at Penny's.

a great looking make and love the additional details you have added. Thanks for joining us at Frilly and Funkie this time x Trace x