Morning peeps, I've done the first round of post holiday washing and ironing then spent the afternoon having a nana nap or a siesta yesterday. I'm off to work now, hopefully there aren't any major problems to sort whilst I've been away, counting down to my next week off at the end of August.......how bad is that. Being as there are a couple of challenges for Chrstmas in July it seemed apt to show you this card I made for Cuddly Buddly before going on holiday......a sweetie called "Its Santa", I made it as a swing tag on top of a pressie....well a fake pressie card, coloured with prisma pencils. the paper is from Cuddly Buddly as well and it wouldn't be Christmas without lots of glitter. I used glossy accents to make his boots shiny and dimensional. 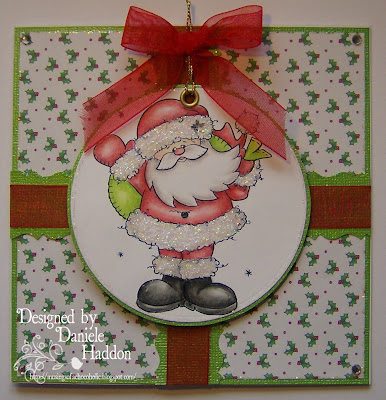 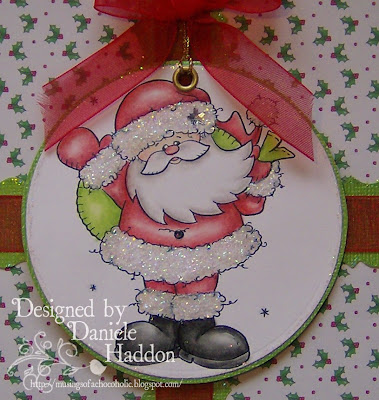 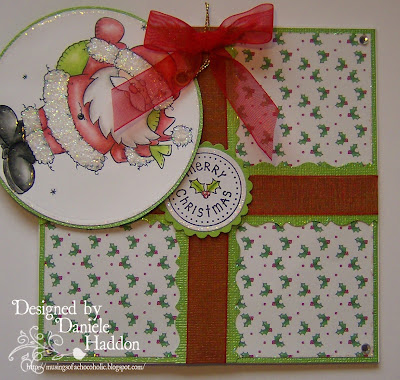 Welcome back Daniele. Loving your card and congratulations on your new DT position. Annette x

Hiya hun...and welcome back..! Another cute card Daniele....and I am so pleased you are on the Teddy DT Team too....woohooooo!

have a lovely evening...hugs Vicky xx

Very cute card, love the moving Santa. Thanks for playing along at Winter Wonderland. (I have some candy.) Marianne x

Awww ! I love the Santa, and the sweet hidden sentiment detail..
Thanks for joining us this week at polkadoodles . Good luck .
Hugs xx

Beautifully colored and love the sparkle you added! Thanks for participating in the Creative Belli challenge

Daniele this is gorgeous, love the way the image panel moves, and the present great card! thanks for sharing with us at pollycraft
Joey x

great take on this weeks challenge at the Winter Wonderland and beautiful creation, thank you for joining us
Hugs Kate xx
I have candy if you are interested

how darling and what a fab ornament for your Christmas tree!
hugs Lynn

such a great card, love the idea of the present and the moving Santa.
Looking forward to working with you on the new DT.
Hugs Sally xx

Lovely card Daniele love all the sparkle on santa. Arlinex

Just realised you'd entered this in the challenge. It's fabulous!
Thanks for joining in.
Hugs, Fliss xx

love your card, its wonderful. thanks for joining in at OLLCB this week

Gorgeous card, and thank you for your lovely comment. Look forward to seeing much more of your work

What a beautiful Xmas card!
Thanks for joining us at Ooh la la; we hope to see you again soon. DesigNeAl x

Yaaay a christmas card! I love this idea! Its awesome and the surprise is a cracker! Well not literally... you know what I mean!

Hi, what a fun christmas card!! It was nice to visit your blog. Good luck also with tasting the choclates ( read in the sidebar ),
and I see that you love holidaying in Italy. Who knows we might meet one day.
Ciao Blankina from a hot Italy
PS my entry is also a christmas card