Afternoon peeps, thought I'd post this card today although its another Christmas one, I coloured the image before Christmas hoping to make it before the big day but I didn't get time so I made the card this week and finally fininshed it today.
The image is from Teddy Bo.com another sweetie of an image and I used Prismas for the colouring. The papers are from First Edition, I made a stepper card because I wanted to create a scene with a layered effect, so the first step is made up of several torn papers in white and blue to represent the snow, I then used Snow Writer by Decocraft for the snow and added stickles to the top of that when it had dried for added sparkle.I also placed a folded tree ontop of another tree which had been distressed using Pine Needles and then embossed in Cosmic Shimmer Aurora to get a dimensional one. 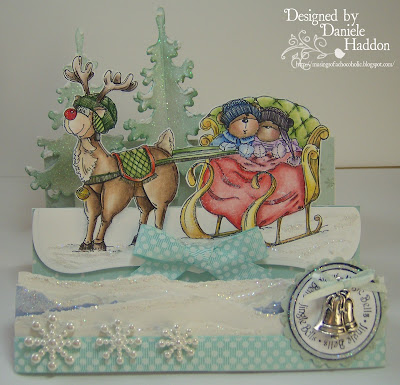 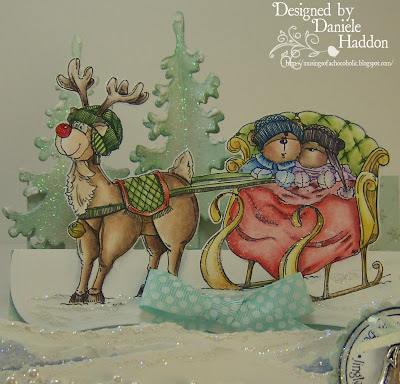 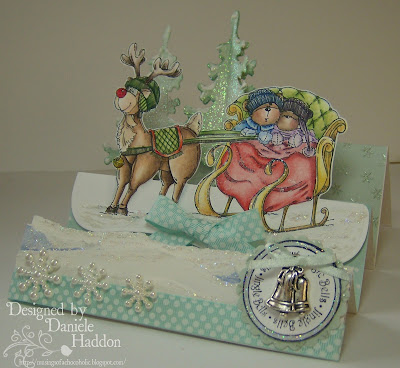 Fantastic card - so much detail and I love the fold - thanks for joining in my CHNC challenge 55 - hope to see you again soon. x

this one's a stunner Daniele! fabulous colouring and dimension, and I love the little reindeer!
hugs, annie x

This is fantastic! Daniele, I like everything about it!!!!
Kevin xx

Hi Daniele, wow you and me both at the step cards! Love yours, such a lovely little scene. Hugs Frea

Wow your card is stunning. Love the scene you have created.

This is just stunning! The design, the colors,, the snowy ground! Everything about it is stunning! Thanks so much for joining us at Teddy Bo towers and good luck!
Hugs
Tammy Louise

What a fabulous card and just love that super scene you have created. Thank you for joining us at Crafty cardmakers.

Awww Daniele, this is such a sweet card. Hugs x

such a pretty card. Thank you for playing along with us at Heart Song.

Wowww Daniele this is superb, what a beautiful scene you have created for the Teddy Bo images, they look gorgeous, I love this so much.
Hugs
Lorraine x

What a wonderful stepper card! Fantastic colouring too!
Thanks for playing with us at LRW!

This is just adorable and love all the detail :)

Oh my gosh, how amazing is THIS?! Beautiful job--this is fabulous! Thanks for joining us this week at CCM! :)

Gorgeous step card, Daniele! the iamge is super cute and you coloured it to perfection! Love it...and you are such a lucky lady...already have a xmas card for this year, LOL!
Hugs, Alessandra

This is AWESOME! I love all the details, and the image is just gorgeous. TFS, Donna

Lovely stepper card! I've yet to try that type of card. Yours looks wonderful. I love all of the elements! Thank you for joining us at Hooked on Craft challenges!

Oh this is amazing Daniele, I wish I could do stepper cards like this! Thanks so much for joining in with our "Bows" challenge at LCI this week, good luck! Pami x

This is so adorable! It's not just a card...it's a fabulous decoration! This would look so cute sitting on a mantle. Thanks for playing with us at CCCC.

Beautiful ladder card. Sweet image. Love the colors. Thanks for joining us this week at Heart Song Inspirations. Hope to see you again next week.

WOW Daniele, this one is a beauty!
Love the colouring and the effect with the snow in the steps! Thank you for sharing it with us at Teddy Bo this time
HUgs, Jill

Your card is a real stummer. I love the scene, the dimension and the colours you've used, it's beautiful.

Thanks for sharing with us at Crafty Cardmakers.

Awesome card! So many beautiful details and colors, very nice! Glad you played along with us at CC&CC. Aloha, Joanne.

Wow... what an amazing creation.

Thanks so much for playing along with us at Paperplay this week.

oh what a fabulous scene .. beautiful colouring
Thanks for joining us at LCI this fortnight
Lisa x

Wow this is to cute for words! Its amazing!!!!!
Thanks for sharing it with us at Teddy Bo's Challenge and good luck.
Love Clairebears x

Hi Stunning scene every inch is perfect from your colouring to layout !! super craetion !! Thankyou for joining us at the Teddybo Challenge ;0)

What a great and very clever card you've made. You obviously took time to create this scene and it really shows.
Hugs
H xx Teddy Bo DT