Evening peeps just got back form the NEC with my daughter, I really look forward to our girlie day out, I did have to deposit her on a seat for awhile as she wasn't feeling too well, cup of tea with 5 sugars  in later and she was feeling better so I guess her sugar level was low due to lack of food......I did stick to my list but got side tracked only a smidge in fact my daugter kept asking when I was going to start spending......lol, I must have been feeling ill as well, I did buy quite a few dies as there were quite a few bargains to be had and it would have been rude not to buy two or three of them. I did manage to catch up with Nickki from Polkadoodles, her stand looked lovely, loads of samples and goodies, when I went back in the afternoon she was still swamped so I'll have to catch up with her another time. The card that I've made features one of the new images from the CD Pretty Tuff, the papers are also from the same CD which was launched at the NEC this weekend and will be available to order online tomorrow.I used my prismas to colour the image. 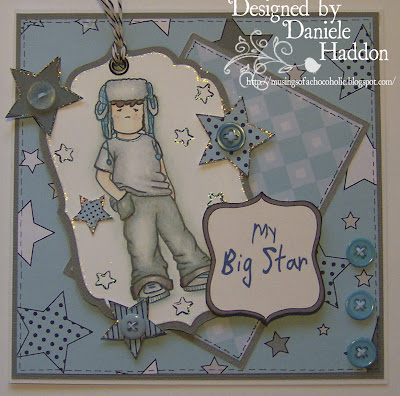 Challenges
Our Creative Crew.....masculine card.
Totally Papercrafts......stitch it.
Poodles Parlour.....Lets hear it for the boys.
Paperplay.......Button up.
Oh La La......stitching real or faux.
Simon Says.......Buttons
Off to unpack my goodies
hugs
Posted by Daniele at 19:23

I love it Daniele...great image and super layout...and thanks for joining us at tpc too...

Great card for a boy. Glad you enjoyed the NEC.
Yvonne x

oh wow thos card is fab Danielle, you put me to shame, I find it so hard to make good boys cards. Hope you had a lovelyy time at the NEC,
hugs,
Em.x

what a nice and boyish card, love it!
Hugs, Alessandra

This is a super boy card ... love that image, and your colouring is fabulous ...nice layout and design!
And, thank you for joining us at Our Creative Corner!!!

Oh this is amazing chick. How adorable and the colours are really fab. Thank you for joining us this week over at the Simon Says Stamp Challenge. Hugs, Dawny x