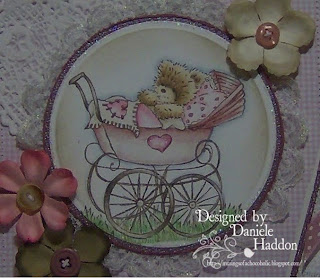 Morning peeps hope you are all well, at least I managed to get some more weeding done on Tuesday with the help of my Grandson, some of my plants are now missing leaves as he thought they were weeds, we have loads of ladybirds in the garden, never seen so many and I showed Ethan a worm so he spent the rest of the afternoon lifting up stones trying to find more.....he thought they were snakes.....bless.
Todays card was for my sons lecturer at University, his wife has just had a baby girl so on Monday my son tells me he wants a card, then late afternoon he tells me its from all 14 students and they all want to sign it.....6 inch card wouldn't be big enough, then he tells me he wants it for the next morning so guess who pulled a late night of crafting, I was inspired by a card that Colette had made on her blog so I though it would be perfect for the baby card. The image is from Crafters Companion coloured in with Prismas, the papers are from Papermania, called New Arrival......thankfully all the students liked it and managed to get all 14 messages onto the back. 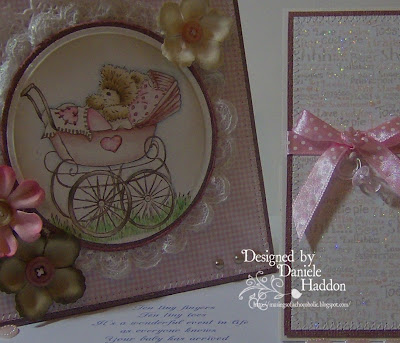 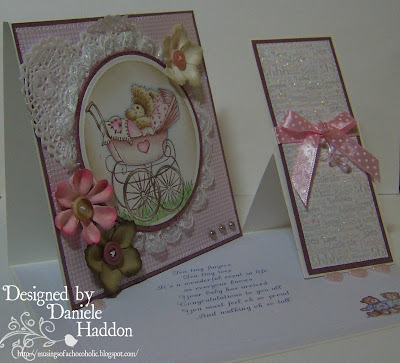 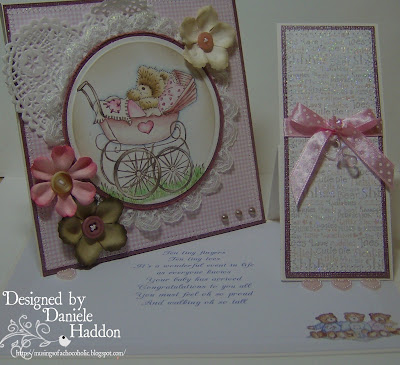 This is absolutely beautiful. Thanks for joining us at Glitter Geeks this week!

oh this is so beautiful . I love the design and the cute little image
Thanks for joining us at LCI this week
Lisa x

An absolutely adorable card Daniele and well done for pulling out the stops to make it too. The image and shape are just gorgeous.
Your gardening sounds like fun too, much more so with the help of little uns.
Hugs, Fliss xx

What a gorgeous card.

My weeding has been curtailed cos it's just too soggy underfoot.

Hi Daniele this is truly wonderful and full of so much delight, the whole design gives me so much pleasure to see.
Hugs
Lorraine x

Absolutely gorgeous card. Love the easel design. Was going to do some weeding myself but pouring it down at the moment so no chance of that.
Mags
x

Adorable card, I'm sure your late night making it was much appreciated.
Yvonne x

Such a beautiful creation, love it!
Helen x

Wow this is stunning! Fabulous card, i love it! Thanks for joining us at Glitter Geeks this week, Paula ;))

How beautiful Daniele, what a gorgeous baby card , and a verse everything is perfect, well done Hugs Elaine

Gorgeous! I love everything about these. Thanks for playing along with us at the Creative Belli challenge!

Oh My Word, this is beautiful! Love everything about it, thanks for sharing it (and your weeding story, lol) Donna xx

This is a beautiful card and well worth the late night effort :) thanks for joining the glitter geeks challenge this week x

Hello Daniele
This is positively adorable and definitely has the "Aaahhh" factor.
Wishes
Lynne

thank you for your comment Daniele. x
Such a pretty card, lovely and soft. Gorgeous!!

So sweet! Love your soft coloring on the image!

This is a beautiful set Daniele, I love the layout, and such pretty colours. Thanks for sharing with us at LCI this fortnight, good luck! Pami x

Oh this is absolutely gorgeous Daniele.
Thank you for joining us at Everybody Art Challenge.
luv
Debby

Stunning creation! So happy you joined us at Creative Belli!