Happy WOYWW .....your're just a click away from an around the world desk hop starting at Julias pad, the sun is shining or it will be later cos the weather man said so and they are never wrong.......its lovely seeing all the trees start to turn to their Autumn colours, although they're still quite green at the moment. Yesterday was grandson day...... and he's come down with a cold so he's even cuter at the moment with his squeeky voice, the only thing is we will have all gone down with a cold by the end of the week. My grandson is into Chuggington and his favourite character is 'action chugger' so yesterday afternoon we wer digging in the garden......I was trying to do some weeding, Ethan had a trowel and was digging in the gravel throwing it over his shoulder shouting "action chugger" at the top of his squeeky voice....he had fun and although I didn't get a great deal of weeding done I had fun as well........
Todays desk is a working progress for this weeks challenge at CC, alchohol inking on grunge to produce an agate finish.........not quite got it yet, Mr Holtz makes it looks real easy in his book, the gold is really over powering on mine so I may just do it again and then probably again, as I've already had 2 goes already. 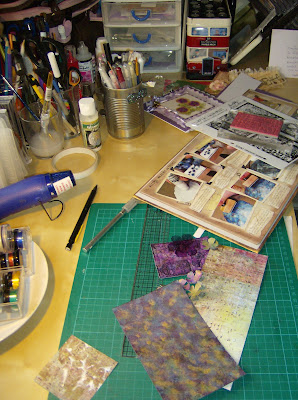 Have a great day......off to work now, if it's as hot as they say it will be today
we should be fairly busy with ice cream and we're selling our christmas chocs
as well......
hugs from Daniele
don't forget to check out my blog anniversary candy.
Posted by Daniele at 07:56

Hi Danielle, love the colours you are using. Have a great Wednesday. S (13)

I can't see the picture of your work space. I must have connection probs this morning. I wil be back tohave a look later, but thanks for sharing anyway.
Have a good week
Sue x 8

Lol, I would love someone to come and do some 'action chugging' in my garden! I know what you mean about the alcohol inks, I can't seem to reproduce whatever it is I'm aiming for. Practice, I guess! Helen (46)

Morning Danielle :D ... loving the stuff on your workdesk, I like all the gold but if you don't have you tried only a single drip of mixative, or going back to the card you've already done and adding more blending solution either by dripping direct to card or by wooden applicator ? .. just a thought x :o)

Morning Daniele, thanks for sharing your fab desk! your WIP looks fantastic even if it's not the finish you're after.
have a wonderful wednesday!
hugs
Michelle
x
#49

Great desk - I have in my mind what I want things to turn out like and they never do...try and try again ....
Sarah #5

What fun with your grandson. Sounds like he's a doll and "action chugger."

Don't you just hate it when people can make things look so easy and you have such a hard time with the technique? It's frustrating for me, and it sounds like you are using a lot of product in order to get the look you want. Hope it turns out the way you want it to in the end. Happy WOYWW (# 2).

The Taming of the Glue said...

Lovely creative desk, love your colours, hope your little one is feeling better today! Have a great woyww
(Lyn)

hi Daniella, isnt it annoying when they make it look so easy and it isnt, keep trying its half the funn :) 115

The pieces on your desk look great and so do the colours, sometimes we are all to self critical of our own work. Have a great evening, Tracy Evans No. 17

Hi there, love your desk and that you haven't given in even though the agate finish is a bit of a challenge! love your last post the creation is fabulous and well worth all the effort involved, thank you for sharing:0) xx

I've done my CCC for this week, not one of my favourites but it's good to try all the different techniques out.

I love that bus on your desk - is it your alcohol ink holder? What a fab idea!

Hope your colds get better soon.

Lovely tidy desk. hope you don't get the cold.
Elaine no55

Great colour scheme you have going there!

Clare with paint in her hair said...

I spy you are doing the compendium challenge!! reminds me i need to get on with mine

Nice busy workspace there - hope the practising works out for you - although the tags look fine to me! I havent tried alcohol inks on grunge yet but I am sure I will be in the same boat! Sunshine Girl (28)

Great desk. Thanks for sharing.

Good Luck with your third attempt. Am sure your other ones are fine - you will be able to use them won't you? #45

I am having trouble with this technique too babe, I am going to experiment with different colours.
*hugs* Heather x (41)

Hi, I'm late lovely work desk. Love how you are working on the grunge. thanks for the snoop. Hugs JO.xxx No27

Hope by the time you read this you have managed to ink and grunge with easy!!

oh bless Ethan - the old gravel figging - takes me back! The gold doesn't look too overwhelming to me, funny how we perceive things differently. However many times you do it, it will be different each time - the beauty of the Th styles I guess!

Haven't tried the grunge thing yet. Love your colors!