Well my little holiday is over and its back to work tomorrow.....did I get lots of crafting done? .......no, did I open my melt pot and have a go?.........no, but I have made some cards for Cuddly Buddly though, I've been playing with the new spring collection and I did spend yesterday having a tidy up and re-organised my craftroom , I've had lots of stamps that were just heaped in a box, you know the ones you're not sure what they stamp like as and you never use them ,so I spent yesterday stamping the images on A5 sheets of white card and then laminating them afterwards so that I could put my stamps on .......actually it was a well worth while task as I now know what the image looks like now and I had a few nice surprises, especially the ones I've collected out of the rummage baskets at shows.
Todays card is a Toby Tumble image, coloured with distress inks and sakura pens, papers are also digi downloads from Cuddly Buddly. 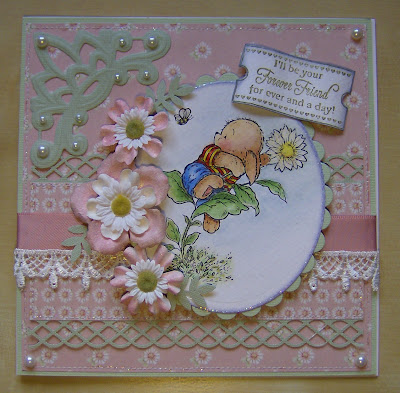 the daisy heads are from CB, the background to the daisy flowers have been glimmer misted

for a smidge of extra bling, the corner die is by Marianne dies 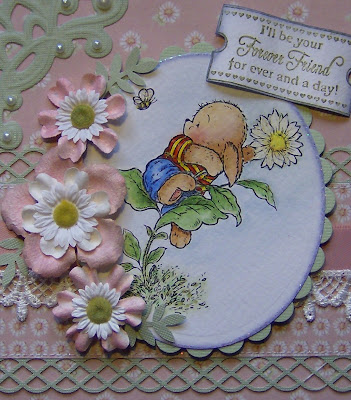 challenges
CR84FN.......colour challenge, peach pink and yellow.
Charisma........pearls and lace.
Create4Fun......Sketch
Papertake weekly.....anything goes with the option of lace
thanks for taking a peek
hugs
Posted by Daniele at 20:23

Smashing card Daniele, so cute and pretty. Congratulations on your win. Annette x

This is such a cute image with lots of lovely details in the pearls and lace ribbon. Thanks for playing along with CR84FN.

What a cutie Daniele!! Love the soft colours and the lay out of the card. Hugs, Frea

The extra time spent organizing is always worth it in the end, especially when you discover gems! This is such a cute card. LOVE the sentiment and the flowers and the glimmer! THX for playing with us at CR84FN!

Darling card, Daniele! Love the sweet image and sentiment! Thanks for playing along with CR84FN!

What a sweet card Daniele! Love the pretty motif embellishment and the pearls! Thanks for playing with the CR84FN challenge! Hope you join us again :)

WOW! Very pretty! So many beautiful details!! So much care must have gone into making this beauty!!!
So glad you could play along with us at CR84FN! Hope you'll join us again next week!

Lovely! So much attention to detail. Thanks for playing with CR84FN this week!